The 2014 Winter Olympics will be Eddy Alvarez’s first Olympics and he is far from inexperienced in the world arena. He has been compared to Apolo Ohno in his ability to come up from behind and pass. The pressure is on 24 year old Alvarez and the rest of the US team: J.R. Celski, Chris Creveling, Kyle Carr and Jordan Malone as they compete in Sochi. It will be the first Olympic Games in 12 years that the US has competed without Apolo Anton Ohno , the most decorated American Winter Olympian with eight medals.

Alvarez’s Path to the Olympics

J.R. Celeski is Alvarez’s toughest competition. As a two time Olympic skater, Celeski’s experience tops Alvarez’s rocky ascent to the Olympic team and is favored to bring home the gold.

Celeski won two Bronze medals at the 2010 Winter Olympics in Vancouver and set a world record when he won Gold at the 2012 World Cup in Calgary.

The US Speed Skating Team is hopeful at their chance for Gold. With new member, Eddy Alvarez, and a new super aerodynamic suit developed by defense contractor, Lockheed Martin and Under Armor, the team may just have that extra something that will make the difference between going home empty handed or going home with a medal.

J.R. Celski: Profile of US Speedskating Olympian for Sochi 2014 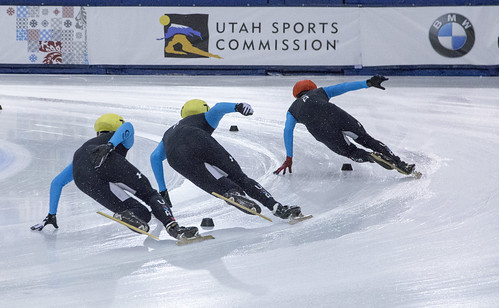